On the northernmost seaside of the lovely Isle of Sri Lanka, Adorning the ancient city of YALPANAM, Known more as JAFFNA, there looms large a trimly town deriving its historic name KANKESANTHURAI (from the fact of the arrival of the image of lord KANKEYAN, Another Manifestation Of Lord Skantha) affording sight seer an opportunity to enjoy a kaleidoscopic view of the town ship that comprises several workshops, Factories, built-up areas featuring modern mansions, star hotels and developed lands. In this locality that prides in a historic background of spiritual wonders, the people live a well disciplined life conscious of religious responsibilities and showing reverence to Gurus and elders.

The aboriginal Queen Kuveni ruled ancient Lanka when King Vijaya immigrated to the island. He had promoted Hinduism and ordered 5 Shiva temples to be built in the four comers of Lanka. These are Thiruketheswaram and Thirukoneswaram in the east, Muneeswaram in the west, Naguleswaram in the north and Chandraspkaram in the south of Sri Lanka. He also established a temple for Lord Skantha/Kankeyan -in the north of the island where Maviddapuram was later founded. 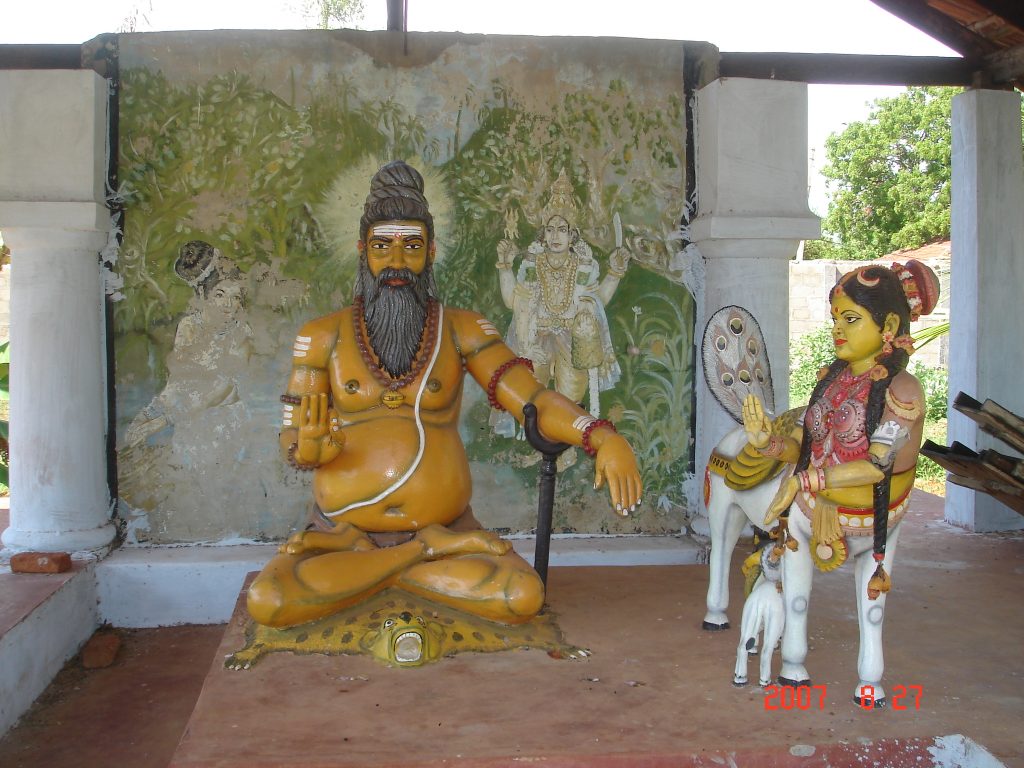 “Kovitkadavai” was the lovely name by which, the area that formed the three important villages of Maviddapuram, Kankesanthurai and Keerimalai was known in the past. In the meantime, the King of Orissa had a beautiful daughter who was very beautiful and pious. She was called Kanagasunthari and spent most of her time visiting spiritual and religious places. On one occasion, she went to pothihai-malai, the abode of Ahasthya saint. There she saw Hayakriva saint deep in meditation and laughed at his features resembling a horse and disturbed the meditation. The angered saint cursed her and said that she would end up with a horse face. Kanagasunthari was shocked at this and pleaded for mercy. Hayakriva saint blessed her and said her devotion to Lord Skantha would cure her. Kanagasunthari returned home and lived a long life.

In her next birth, she was born as the daughter of the King of Madura and named Maruthapuraveekavalli. There is historical evidence of the beautiful Chola princess in the 7th century having suffered dyspeptic disorders and facial abnormalities desperately seeking a cure for her maladies. She continued her tireless worship to Lord Skantha and was instructed by Shanthalinga saint to bathe in Keerimalai Sea. The Keerimalai resort, displays specific water springs oozing fresh water at the confluence with the blackish waters of the narrow Palk Strait. These springs possess healing qualities and many persons have used the resort to heal themselves of minor ailments. God Shiva instituted Kandaki Theertham in the sea. Maruthapuraveekavalli arrived in Lanka and did as instructed. She regularly prayed at the Lord Skantha/Kankeya temple renovated by King Vijaya and maintained by the priest at Naguleswar temple. Soon she lost the disfiguration and became her beautiful self. 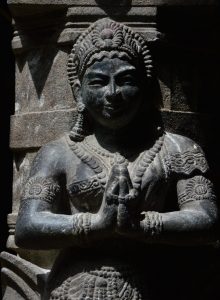 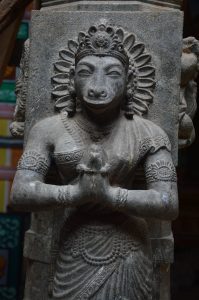 Elated by the grace of her Lord Skantha/Kankeyan, she named the place “Duragagana Vimoshana puri“. In Sanskrit this means the place where her horse face changed. In Tamil it became “Maviddapuram” which is of the same meaning.

Maruthapuraveekavalli chose to renovate the tiny Lord Skantha/Karthigeya temple that existed for 5000 years, into a fully fledged temple in accordance with Vastu shastra and Saiva agamic principles. This was done as a lasting reminder of the rare spiritual experience she enjoyed, by the grace of Lord Skantha/Karthigeya. She requested her father, the King of Mathura to send necessary materials. The king sent forth the necessary sculptors and artists to build a large temple according to traditions. The entourage was accompanied by building materials, granite, statues, necessary gold, silver and other metals and precious gems.

The King took it upon himself to have deities of Lord Skantha/Karthikeya, Thevayanai and Valli along with Vigneswara and Mahalakshmi made in his temple in Chidambaram. The best sculptors were recruited for this task and the artistic aesthetic – creation was successfully transported to Maruthapuraveekavalli’s temple.

Gayathurai was the port near Keerimalai, but since Lord Kankeyan’s deities arrived there, the port came to be called Kankeyanthurai after the Lord. Maruthapuraveekavalli and her friends were overjoyed by the beauty of the deities and installed it in the temple. Chidambaram Deekshathar accompanied the deities. Additional buildings were built to accommodate the priests, workers and devotees.

On completion, Maruthapuraveekavalli had to hand over the responsibility to someone. This was none other than Theedchathar Periamanathullar. A charity deed was written which specified the code of conduct expected of the members of the Aadheenam.

Since he was recruited from Chidambaram, under the king of Madurai, the title Maharajasri was bestowed on the Theedchathar, and this should continue so long as the sky and earth exists. His family carried this title and the present Chief Priest is the 42nd in line.

Theedchathar managed the entire complex. He was an ardent devotee of Lord Skantha and had dedicated his life to serve the Lord and remained a bachelor. Maruthapuraveekavalli was touched by this dedication. She felt a suitable wife would help Periamanathullar to fulfill his duty better and tried to look for a bride. Unfortunately, few young Brahmin women would come to Sri Lanka to wed someone. So she combed the local scenario and discovered Valambikai from Keerimalai and conducted the marriage.

Since then the Mavai Atheenam is managed by the Theedchathar Periamanathullar family. To this day, the family conducts the governing and management affairs as described in the Charity deed. They honor the workers (dhobis. casual laborers, farmers) on the Ther festival day. On other days they honor musicians and artistes, gifts are given to various other employees working for the temple.

King Ugrasena helped Maruthapuraveekavalli to complete the building and on ANI UTHARAM the deities in the temple had the KUMBAABISHEKAM. Having accomplished her task Maruthapuraveekaavalli left behind a beautiful temple for Lord Skantha/Kankeyan in Maviddapuram and wedded King Ugrasena and went to live with him in his kingdom.

However, this temple became a source of inspiration for the Tamil community living and working in the Jaffna peninsula. Due to its historical background it attracted many researchers, architects and archeologists from far and near. The healing properties too interested people suffering with minor ailments who visited Keerimalai springs and on the way paid homage to Mavai Kanthan.

As a center of religious activities, the temple has taken care of the cultural needs of the congregation. The temple has organized several cultural and religious activities. This temple had been supplying its congregation and dependants with all facilities and necessaries of religious life till that fateful occasion in the 15th century took place. With the unfortunate arrival of the Portuguese and Dutch as conquerors of this land, Several Saiva shrines including this ancient Temple were raced to the ground by the bigoted foreigners, headed by Christian Missionaries. 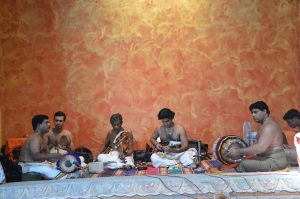 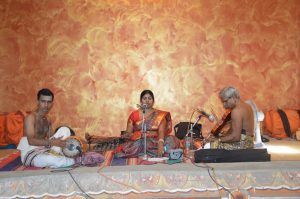 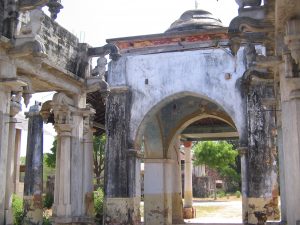 During the Portuguese and Dutch reign, the temple was erased to the ground.  Rumor has it that one of the workers absconded with valuables. However, during the British period things changed. The British adopted a policy which enabled locals to worship their idols. Hence Sabapathy Kurukkal obtained the help of the British and built the present temple. The deeds reveal that the temple was built by Sabapathy Kurukkal in 1782. He served the temple for 43 years and dedicated his life to bring the temple back to its old glory. He was involved in erecting the temple and adjacent buildings and conducted the Kumbabishekam on the Ani utharam. In 1825, he handed over the responsibility to his son Sokkanatha Iyer.

Today this Temple, situated as it is in almost twelve acres of land, is a pleasing complex with the Sanctum Sanctorum at the centre, the Raja Gopuram, the tallest and most picturesque of its kind in this District, the shrines in the praharams. There is a flower garden where fragrant and chosen plants riot in delightful fascination. There is a spacious Hall for Ceremonial occasions, pilgrim rests and Madams. However all these do not satisfy the conditions of modern requirements and facilities, lacking as they are in extent and content. During times of floods, distress, epidemics and other abnormal circumstances large numbers seek shelter here. Devotees in their performance of religious rites, Ceremonies such as initiation, ceremonial starting the studies of children, first feeding of infants, wearing of the golden thread Thali in holy wedlock congregate in large numbers in these premises because of the spiritual background, antiquity and more particularly due to the priority of place this temple has among places of Worship.

All these occurrences demand the provision of proper facilities by the Temple Authorities but owing to the growing number of devotees and the increasing activities of the congregation such facilities are in short supply. To meet the immediate demand of the temple itself, the construction of an Exhibition Hall called VASANTHA MANDAPAM, two hundred feet in length, forty feet in breadth and twenty feet in height has been planned and commenced with the initial contributions of willing and wealthy worshippers. However, even the whole hearted donations could not make up the stipulated sum of Rupees estimated for the completion of this massive structure. It was at this juncture that His Excellency J.R. Jayawarrdhna on the request of Mr. S. Suntharalingam ex M.P. & Minister, and Mr. A. Amirthalingam, M.P. came to our rescue by allocating from the presidential fund One Lakh of Rupees toward this important religious project having known about the antecedents of this ancient shrine and the solemnity and efficiency of the undertakings of the Temple Administration at present. Even this great gesture could not help fill the gap of the huge deficit needed for completion of the Building.

Hence our effort in making a reasonable appeal to all Charitable Organizations in this Island and in extending our humble request to similar Institutions Overseas particularly to foreign Governments. In making this special request it is our duty to acquaint every one with some salient facts relating to the scope, extent and significance of the congregation of this Ancient Temple.